WE ARE STILL OPEN and fully operational!
Stay safe and support your local fitting partners with Tyroola.

Rapid Tyres is a budget tyre brand that, let's face it, you've probably never heard of before. Owned by The Shengtai Group, Radar is part of a massive Chinese conglomerate that manufactures tyres for cars, SUVs, both big and light trucks, commercial buses and even for aeroplanes. The company owns ten brands and produces over 21 million tyres yearly in a state of the art facility in China. Despite its relative anonymity, Rapid has been 'rapidly' gaining attention from industry insiders and customers for their dynamic patterns, innovative design, and robust endurance, and high quality despite it being a budget or 'cheaper' brand. Rapid is now Available on Tyroola as it hopes to become the low priced tyre category leader in the Australian Market.

Find Rapid tyres in your size

Rapid is busting the myth that the word 'budget', when used to describe tyres, automatically means it’s a lower quality product. Rapid's tyres boast of excellent quality while offering outstanding value for money, to protect not only your wallet but also you or your family on the road. Each tyre is made to international standards, using advanced equipment and premium raw materials. Rigorous product testing processes at all stages - from development to delivering to retailers - are also employed to ensure quality.

Rapid has over 30 years of tyre making expertise and experience from The Shengtai Group. With a one million square meter state of the art production facility in China, Shengtai makes over three million truck and bus tyres and 18 million passenger car tyres yearly. With over 500 engineering and technical personnel employed to oversee every aspect of design, development and production, Rapid ensures that each tyre is of the highest standards and conforms to strict quality controls.

Rapid aims to deliver outstanding performance where it matters, right where each tyre comes into contact with the road. Its highly qualified engineers have designed each Rapid Tyre with performance in mind for total driving satisfaction. A mix of a special silica compound, innovative tread design, and long-lasting grip and durability all come standard with every Rapid tyre regardless of what vehicle they're on. These elements working together will definitely make you notice improved driving performance upon installation.

Are Rapid tyres worth the price?

Rapid Tyres is making a name in the global tyre market. It is currently being distributed in over 60 countries worldwide and continues to pass numerous international standard quality checks. Radar's proven reliability, unmatched performance, durability, versatility and value ranks high for industry approvals and has received ISO 16949 and OHSAS 1800 certifications as well as from various countries- DOT, ECE, GCC, SABS, REACH, SNI, CCC and more.

Lead engineers and designers that worked on Michelin Tyres have adopted the same meticulous standards and production techniques while producing Radar Tyres. Raw materials used are of the best quality available, and only the highest rated tyre making machinery available in the industry handle actual production. These include the American made Bartel Bead Wire Extrusion And Assembly Machine, theTroester Tread Extruder from Germany, Tire Uniformity Test Machine from Japan and Hydraulic Tyre Cutting Press from France.

The Rapid P609 is designed for use on high performance vehicles, mainly in urban driving conditions. Featuring optimal grip, braking and traction in all weather conditions, the P609 sports an asymmetrical tread pattern that promotes improved handling and cornering even at high speeds. 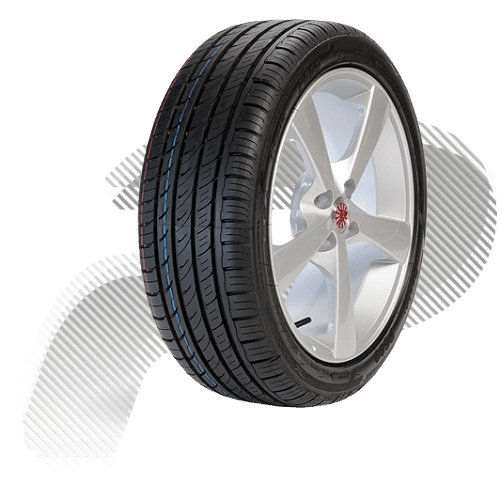 Choose from a huge variety of tyre brands and read hundreds of reviews. Save up to 50% off the RRP.

Buy the right Rapid tyre for your vehicle

The Rapid Ecosaver is an all-weather tyre designed for SUVs and 4x4s for city and highway driving that features an environmentally friendly tread compound that provides durability without sacrificing comfort and stability.

The Rapid P309 is an all-season value tyre designed for urban driving. It boasts of enhanced straight-line stability, superior traction and braking in all weather conditions and reduced road noise for a comfortable ride. One of Tyroola’s best-selling tyres.

The Rapid Ecolander AT is an all-terrain, all-season tyre for SUVs, 4x4s and light truck drivers that like to push their vehicles to the limit. It offers superior tyre strength, stability and superior braking and traction whatever the weather.

More Popular Tyre Brands For You

With its uncompromising commitment to innovation and safety, Hankook provides tyres to the leading automakers in the world, including Audi, BMW and Porsche to name a few.

Accelera Tyres are developed and produced for all kinds of vehicles and are designed to provide consumers with a unique blend of performance, elegance and safety that ensures optimal traction as well as enhanced tread life.

Yokohama Tyres is renowned for being the official supplier of the World Touring Car Championship and the Japanese Super Formula, and a leading OEM supplier to prestigious car brands like Porsche and Audi.